Decluttering for a Renovation 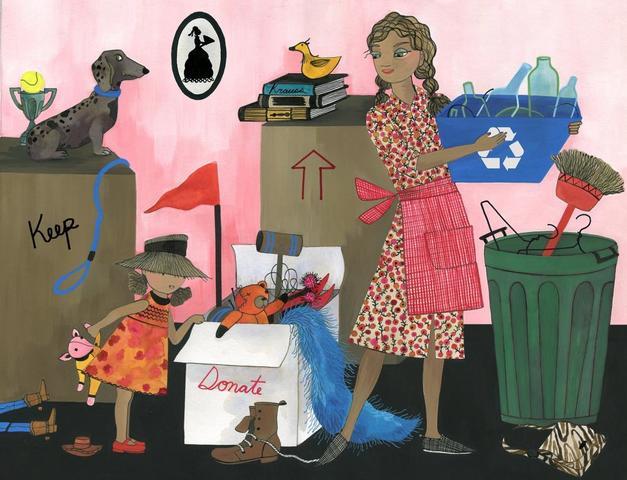 Of all the random objects residing in my kitchen drawers, the truffle shaver is probably the most absurd. I’ve cooked with fresh truffles once, long before I lived in this house. I bought this slim, metal blade at the now closed Dean & Deluca in SoHo with my husband before he was my husband. We were living in our first apartment together in Brooklyn and had the good fortune of spare time and money.

We no longer have either of those things, but we still have this shaver. We may not have it for much longer.

My contractor called the other day to tell me that he planned to start demolishing my kitchen on July 1, the first step of a gut renovation. So the time has come to box up all my stuff to stow away while the work is done. When I put everything back, I don’t want to fill my lovely new cabinets with stuff I never use.

You would think my relationship with this truffle shaver would immediately come to an end. But I’ve had it for so long, and it’s such a quality tool, it’s hard to let it go. It’s hard to part with that time in my life.

But like millions of Americans, I am emerging from the pandemic ready to make big changes to my home. Americans are renovating — home projects were up 35 percent in 2020 from 2019, according to a report by Angi, the home services website. People are also moving at a faster clip, with 83 percent of the homes that sold in March 2021 sitting on the market for less than a month, according to the National Association of Realtors.

Those of us swept up in this moment of house swapping and fixing are now tasked with the tedious job of cleaning out parts of our home we might have neglected for years.

“People are going crazy right now with renovations and spring cleaning,” said Zachary Cohen, owner of a Junkluggers franchise that covers Manhattan, Bronx and Brooklyn. Business is up 60 percent from May 2019, a rush Mr. Cohen attributes to a mix of pent-up demand and an increase in moves.

Before you can hire someone to haul your junk away, you need to figure out what should go and where to put the stuff you decide to keep. How hard can it be? Marie Kondo has spent years commanding us to keep only the stuff that brings us joy. And celebrities have embraced home organizing as a cathartic form of self-improvement, with Reese Witherspoon and Khloé Kardashian proudly baring their closets on Netflix for all the world to see. We’re not throwing stuff out, we’re “editing,” inspired by Instagram memes that cheerfully announce, “Organizing is a journey, not a destination!”

But if you actually have to do the work, and not just binge-watch other people doing it, you quickly remember that the process can be paralyzing.

Becky Williamson, who lives in a four-bedroom house in South Orange, N.J., with her husband and two children, needs to clean out her unfinished basement if she ever wants to turn it into a family room. But the space is packed with stuff from her grandparents, remnants from her own childhood, and things she and her husband, Charlie Williamson, 44, brought with them when they moved from Brooklyn seven years ago.

“It’s bad,” said Ms. Williamson, 41, who sells clothes for a multilevel marketing company. “It’s past the point of no return.”

The Williamsons realized last year, as did many people, that they needed more space. But they couldn’t realistically start the project until the children were back to in-person learning, and that only just happened. Now, as the pandemic wanes, she wants to get the basement cleared out by the fall so she can start the project.

The task feels herculean. What, exactly, is she supposed to do with the Stokke Tripp Trapp high chair that’s still in decent shape? “It wasn’t cheap,” she said. “I don’t want to just put it in a dumpster; someone can use that.”

Finding a taker for the high chair and other valuable items means posting them online one by one, communicating with buyers and leaving things on the porch for people who may never show. And then there’s the stuff that should be donated. And stuff that belongs in the trash.

But I am nearly out of time, and have to make speedy decisions about, say, the melon scooper that I didn’t even know I owned until I dug through this drawer. And the extra apple slicer. For some inexplicable reason we own two — but maybe one will break, so do we keep the spare? And how many cookie cutters does one family actually need?

I called up Faith Roberson, a Manhattan home organizer. Before Ms. Roberson began organizing New Yorkers’ homes, she prepared their meals as a personal chef. She also renovated her own kitchen in Queens in October. Even this professional organizer discovered that she had too much stuff. “I was just confronted with all the things that ever existed in my kitchen,” she said. “I didn’t realize it until I brought it out into my living room. It was too much.”

Ms. Roberson met me at my house recently to talk about her process, and how homeowners should approach clearing out the stuff that stays so long they no longer can see that it’s even there. (I’m talking about you, melon scooper!)

I was anxious about what she would say about the truffle shaver or the excessive number of cookie cutters. But she was not particularly interested in either. Instead, to my surprise, she headed for my dining room, stopping in front of a tall shelf that is part display case for family photographs and knickknacks, part bookshelf. I try to limit the books to cookbooks and cooking magazines, seeing the shelf as an extension of the kitchen, but inevitably more serious reads end up there too.

Ms. Roberson informed me that “Capital” by Thomas Piketty and “The Art of War” don’t exactly set the mood for a fabulous dinner party. As for the cookbooks, they deserve a space in the new kitchen, or maybe they belong in the donation pile. Make better use of my dining room storage, and my kitchen will fall into place.

“The most important thing is function,” she said. “The second thing is authenticity, and maybe even authenticity goes before function. How are you moving in the space?”

The idea behind this reorganizing principle is to break the home down into zones. If the place mats always go on the dining table, what are they doing in the kitchen? They belong instead in the dining room buffet cabinet.

As for the cookie cutters, the problem wasn’t the quantity, it was that the baking stuff — cookie sheets, cake pans and rolling pins — were sprinkled around the room. Take all the baking stuff out of the kitchen, spread it on the dining table, and decide what to keep and what to toss. Then put the survivors together in one box. When it’s time to restock the new kitchen, dedicate a cabinet to baking supplies.

Ms. Roberson says she looks at each kitchen the same way, assessing the person as much as their stuff. “How do I get this person to see who they were and who they are today?” she said. “Their lifestyle matters in a kitchen probably more than anywhere else in the house.”

A person who lives in a studio apartment doesn’t need 20 wine glasses. Someone who never cooks doesn’t need a stack of cookbooks. And I am no longer a person who needs a truffle shaver.

Back to Previous Page
Back to News & Events

We serve the following areas